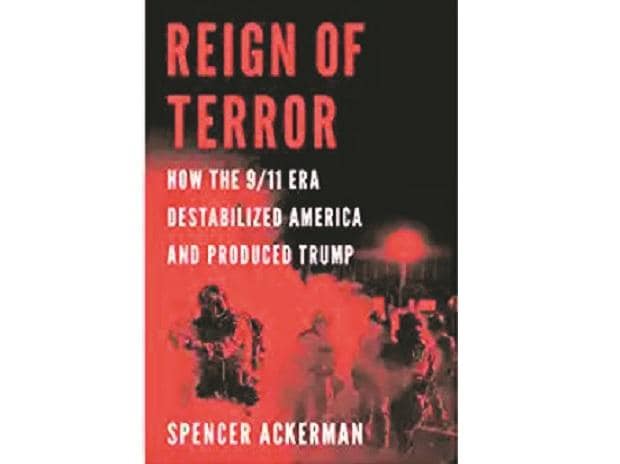 Reign of Terror: How the 9/11 Era Destabilized America and Produced Trump


Spencer Ackerman’s barnburner of a new book, Reign of Terror, reminded me of that moment in 2015 when Donald J Trump descended his golden escalator to announce his long-shot candidacy for the highest office. Instead of starting with heart-warming clichés about the country’s better angels, Mr Trump came out swinging, declaring that the United States was in trouble: “When was the last time the U.S. won at anything?”


It certainly hadn’t been winning any of the wars it had been fighting for more than a decade. Mr Ackerman contends that the American response to 9/11 made President Trump possible. The evidence for this blunt-force thesis is presented with an impressive combination of diligence and verve, deploying Mr Ackerman’s deep stores of knowledge as a national security journalist to full effect. The result is a narrative of the last 20 years that is upsetting, discerning and brilliantly argued.


Mr Ackerman, who has been a correspondent for outlets like Wired and The Guardian, shows how Mr Trump clearly understood something about the post-9/11 era that the professional political class did not. Waging endless war — on Afghanistan, on Iraq, on terror — yielded nothing so definitive as peace or victory, and instead simply fuelled a “grotesque subtext” to which Mr Trump proved to be remarkably attuned. He may have changed his positions on this or that conflict willy-nilly, but Mr Trump never wavered on one key point — “the perception of nonwhites as marauders, even as conquerors, from hostile foreign civilizations.”


Reign of Terror begins with a prologue titled “The Worst Terrorist Attack in American History” — a phrase that for years had referred not to the 9/11 attacks but to the Oklahoma City bombing in 1995. In the immediate aftermath, Muslims were blamed. The actual culprit, Timothy McVeigh, had been an avowed white supremacist, though you wouldn’t have necessarily known it from the media reports at the time, which kept emphasising McVeigh’s “survivalism.”


McVeigh was sentenced to death after being tried in an open court, before a jury of his peers. Mr Ackerman invites us to contrast this respect for due process with how the entire machinery of the government transformed itself in response to the 9/11 attacks, with deadly wars, proliferating immigration restrictions and an elaborate apparatus dedicated to mass surveillance.


Reign of Terror makes clear that what happened on September 11, 2001, can only be called an atrocity; this isn’t one of those accounts that tries to play down the trauma. But Ackerman also suggests that instead of defining the enemy as the specific terrorist network responsible for the attacks, the George W Bush administration resorted to “deliberate indecision.”


White House lawyers pressed for maximum executive power, while Mr Bush would insist that Muslims weren’t the enemy in one moment and then describe the War on Terror as a “crusade” the next.


“The result,” Mr Ackerman writes, “was a vague definition of an enemy that consisted of thousands of Muslims, perhaps millions, but not all Muslims — though definitely, exclusively, Muslims.”


President Bush may have been a conservative Republican, but Mr Ackerman reminds us that liberal Democrats were complicit in starting and sustaining the forever wars. A growing popular disgust with both parties reflected how nativists on one side and progressives on the other understood a truth that centrists elided. The fringes on the right and the left could see how the War on Terror was an extension of the country’s history, Ackerman says, with its settler colonialism and fantasies of a race war; the difference was that the nativist right insisted that settler colonialism was part of what made America great, while the progressive left found it morally despicable. By 2016, nativists were rejoicing at the prospect of Mr Trump pursuing (nonwhite) terrorists without any restraints; progressives wanted the War on Terror abolished.


Those progressives were especially disenchanted by President Obama, who was a vocal opponent of the forever wars but once in office laboured to put them on a more “sustainable” and “more lawful” footing. Mr Ackerman depicts the assassination of Osama bin Laden in 2011 as an opportunity to declare the mission accomplished.


“Instead,” he writes, “Obama squandered the best chance anyone could ever have to end the 9/11 era.”


There is, of course, a counterargument, and Mr Obama’s close adviser Ben Rhodes offers it to Mr Ackerman: “Let’s say he did that, and dismantled our counterterrorism apparatus over that summer, and there’s a terrorist attack and then the world ends.” However inelegantly phrased, it’s a possibility that Mr Ackerman doesn’t really address.


Still, this revelatory book shows that for all the lawyering and “targeted killing,” Mr Obama’s centrist approach simply could not hold. Under President Trump, there were even more drone strikes and less transparency. According to one study, Trump’s accelerated bombing campaign in Afghanistan increased civilian casualties by 330 per cent.


Not to mention that the animus and cruelty that had been stoked for a decade and a half could be easily turned on immigrants closer to home. Mr Trump, Mr Ackerman writes, “had learned the foremost lesson of 9/11: The terrorists were whomever you said they were.”

Gas prices are at a seven-year high and expected to keep rising. How to save at the pump