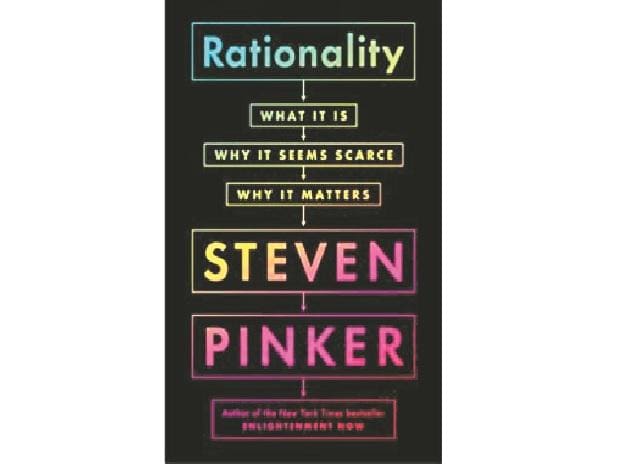 Rationality: What It Is, Why It Seems Scarce, Why It Matters


For someone who so frequently and serenely proclaims that he’s right, Steven Pinker can get curiously defensive. In Rationality: What It Is, Why It Seems Scarce, Why It Matters, Mr Pinker writes as if he’s part of an embattled minority, valiantly making the case that “the ability to use knowledge to attain goals” is so underappreciated these days that the reading public needs a new book (by Mr Pinker) “to lay out rational arguments for rationality itself.”


Mr Pinker doesn’t believe he has much hope of reaching the anti-vaxxers and conspiracy theorists who indulge in the “florid fantasies” of QAnon. We may be living through a “pandemic of poppycock,” he says, but he refuses to submit to “the cynical view that the human brain is a basket of delusions.”


After all, people use rationality all the time in their everyday lives, consulting the knowledge they have in order to get what they want. Still, he is troubled by what he sees as rationality’s image problem. “Rationality is uncool,” he laments. As evidence for its diminished status, he quotes celebrations of nonsense by the Talking Heads and Zorba the Greek. It’s precisely this cultural derision of reason, he says, that prevents us from appreciating rationality’s spectacular accomplishments. “Human progress is an empirical fact,” he writes. “‘Progress’ is shorthand for a set of pushbacks and victories wrung out of an unforgiving universe, and is a phenomenon that needs to be explained. The explanation is rationality.”


The argument will sound familiar to readers of Mr Pinker’s 2018 book, Enlightenment Now, with its insistence that “everything is amazing” and its repeated complaints about people complaining too much. This new book grew out of a class Mr Pinker taught at Harvard. Most of Rationality is given over to ideas from game theory and behavioural economics — parsing the discrepancy between model and reality. If a perfectly rational actor is expected to behave one way, why do so many people behave the way they do?


So Mr Pinker spends page after page walking us through concepts like “base-rate neglect” (giving too little weight to the original probability of an event in the face of new information) and the “availability heuristic” (guessing the likelihood of an event according to what comes easily to mind). Despite Mr Pinker’s bombastic declaration in his preface that he “knew of no book that tried to explain them all,” a great deal of Rationality repackages (with due credit) the pioneering work of scholars like Thomas Schelling, Daniel Kahneman and Amos Tversky. When he is dealing with abstract puzzles involving small-stakes situations, the book is familiar but fine.


The trouble arrives when he tries to gussy up his psychologist’s hat with his more elaborate public intellectual’s attire. The person who “succumbs” to the “small pleasure” of a lasagna dinner instead of holding out for the “large pleasure of a slim body” is apparently engaged in a similar kind of myopic thinking as the “half of Americans nearing retirement age who have saved nothing for retirement.” His breezy example elides the fact that — according to the same data — the median income for those non-saving households is $26,000, which isn’t enough money to pay for living expenses, let alone save for retirement.


Some observations on racial issues are similarly blinkered. Are mortgage lenders who turn down minority applicants really being racist, he muses, or are those lenders simply calculating default rates “from different neighborhoods that just happen to correlate with race?” (A long history of racist redlining may “happen” to have something to do with this too, but Mr Pinker doesn’t get into it.) He goes on to ask why “race, sex, ethnicity, religion and sexual orientation have become war zones in intellectual life, even as overt bigotry of all kinds has dwindled.”


Anyone paying attention to what’s been happening in the last few years might wonder where he got his information. In support of his vague claim, Pinker directs the reader to a footnote citing two sources: A study, whose data ended in 2016, that measured a person’s “explicit attitudes” based on self-reporting (i.e. the respondents had to admit their bigotry); and a few (unhelpful) pages from Enlightenment Now. ”


As it happens, it was at Harvard University that Mr Pinker taught a course with the lawyer and fellow professor Alan Dershowitz. A couple of years ago, some photos surfaced of him with Dershowitz’s onetime client Jeffrey Epstein. Mr Pinker explained that he and Epstein barely knew each other — that he had never taken any funding from Epstein and couldn’t really stand the guy. There is no reason to doubt Pinker’s account; to suggest that their mere acquaintance in any way undermines Mr Pinker’s work would be to make the kind of ad hominem fallacy that he rightfully pillories in this book.


But there was something else that bears more directly on his thesis that rationality has been such a benevolent force for progress. In 2007 Mr Pinker lent his professional expertise to Epstein’s legal defence team, which argued that Epstein hadn’t violated a federal statute prohibiting the use of the internet to lure minors across state lines for sexual abuse. “According to Mr Pinker, that is the sole rational reading in the English language,” the affidavit stated — a sterling example of a thinking process so confidently pristine that it can give unthinking cover to the grotesque.

Restaurants prep for long-term labor crunch by turning to robots to man the fryer, shuttle food to tables